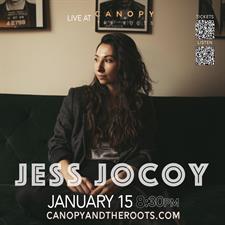 Jess Jocoy makes atmospheric Americana for rainy days and twilight hours. It's an ethereal sound with organic roots, anchored by a longtime love of country music, a storyteller's nuanced delivery, and a folksinger's finesse. A sound that blurs the lines between genres, creating its own blend of twang and texture along the way.

Jess Jocoy knows a thing or two about great stories. She's been writing them for years, mixing autobiography with richly-imagined fiction, gluing the whole thing together with a voice that's every bit as evocative as her songwriting. Brighter Eyes [her latest release] begins a new chapter in her own story, marking the spot where Jess learned to savor the present while pushing forward toward a better future.

American Songwriter “The Ballad of Two Lovers” Track Premiere: "...[the song] has a kind of mournful effervescence as it examines some of the hardest emotions to endure (and the hope that can still exist in the most difficult times). ...a moving tribute to love’s dysfunction, and it shows that something beautiful can still come out of even such a sad situation.”

Glide Magazine Full Album Stream Premiere:"With its rootsy and heartfelt blend of Americana, folk and country, the album finds Jocoy using music to explore what it means to find your place and purpose in the world. ...With a powerful voice and an old soul that can be heard in her lyrics, Jocoy lets her own life experiences transpire to the music, which itself can veer from sparse and twangy rock... to quiet folk... to big sweeping soul... and bluesy, poignant roots music... Throughout the album we hear an artist who balances serious songwriting chops with a commanding, confident voice. ...Such a Long Way is an exciting collection of songs from an artist we will undoubtedly be hearing more from in the future.”

No Depression Album Review: "Jess Jocoy Sings Plainly and Poignantly on Debut Such A Long Way”

Americana Highways: “Aching to Feel Alive” Track + Lyric Video Premiere & Album Review:"Jocoy sings in a voice that is pure and pretty. She also has the ability to tell a story that makes you feel like you are right there experiencing the same emotions as the narrators of these tales... It’s hard not to be moved... profound... earnest... Seemingly without any effort, she creates songs that have universal appeal."

Alan Cackett Album Review: "An artist of fierce originality and charisma, Jess Jocoy is a dynamic singer and equally memorable songwriter, her soulful vocals and descriptive lyrics excel... it's just blissful, ethereal and so brutally honest. ...Jess Jocoy embraces the darker, more sombre aspects of country and Americana. Filled with raw emotion, intricate guitar melodies and soulful vocals, her impassioned creations are a joy for your ears to behold. She delivers her songs of heartbreak, desire, loss and liberation as if her life depends upon it.”

Past gigs of note include: