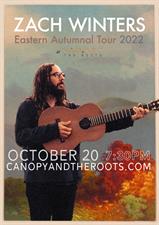 Zach Winters is a naturalist—his work and life often woven together. Winters’ songs resonate with the sacred and the commonplace—companionship, wrestling with the divine, passing seasons, and the pursuit of a tangible beauty. His lyrical themes share a kinship to the poetry of Frost and Tagore. Over the years, Winters has honed his songwriting and DIY approach, garnering praise from voices like Paste Magazine and self-producing six full-length albums as well as a handful of EPs and other projects.

Winters moved his family to southern Mexico for a year for his kids to learn Spanish and to finish his latest 13-track LP, Love is a Garden. The album features Winters most striking collection of songs to date, while staying true to his homemade yet luxuriant variety of indie-folk. It features everything from generous string arrangements to groovy bass lines to warm horn sections, and most notably, Winters’ yearning, gentle, and sometimes playful vocal layering.

In the last few years, Winters has been on tour throughout the US, Europe, Canada, Australia, New Zealand & Mexico, musically migrating with his family and playing shows with musical friends in homes and concert halls. He has had the honor to sing for Syrian refugees, laboring mothers, orphans in Mexico, monks in Poland, pubs in Northern Ireland, and his friends, neighbors and family.

Born on the Great Plains, Zach and his family have returned from southern Mexico. After cancelling all plans along with the rest of the world in 2020, Zach set to work on a new group of songs that will be released in batches through 2021. Another Winters Migration Tour will see them circling the US (dates here), with more dates forthcoming.